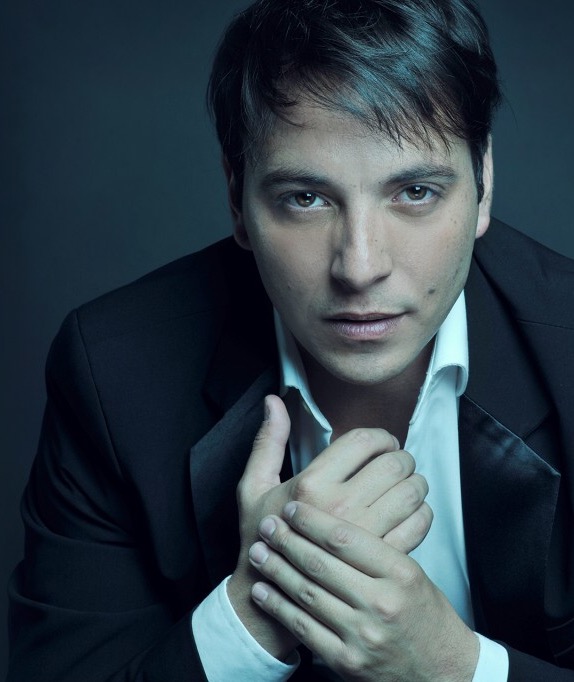 Argentinian tenor Santiago Ballerini is recognized as one of the leading tenors in the Bel Canto repertoire, having appeared at many of the major opera houses throughout North and South America. In the 2019/20 season, Ballerini made his debut at the Canadian Opera Company as Count Almaviva in Il Barbiere di Siviglia. He began the season with his return to the Teatro Colón in Buenos Aires as Ernesto in Don Pasquale, after which he returned to the Atlanta Opera as Count Almaviva. On the concert platform, the tenor sang Carmina Burana with the National Symphony Orchestra in Washington D.C. under Gianandrea Noseda, and he began the 2020/21 season in concert with the Porto Symphony Orchestra in Portugal. This season, Ballerini sang first Frederic in The Pirates of Penzance with the Atlanta Opera, as well as his first Duke of Mantua in Rigoletto with Opera San Antonio. The tenor began the 2021/22 season with his first Contino Belfiore in La Finta Giardiniera at the Teatro Colón, and he will later make his role and house debut as Alzaga in The Magic Opal at the Teatro de la Zarzuela in Madrid.

Before starting his professional singing career, Ballerini was a pianist for nine years and studied Music Therapy at the Universidad de Buenos Aires, specializing in addiction treatment. He was a semifinalist in the Francisco Vinas Competition at the Gran Teatre del Liceu and the Argentine Finalist at the Neue Stimmen Competition in Dresden, Germany. He also won First Prize at the Festivals Musicales Competition, American Society Competition and San Juan Opera Competition. In 2014, Ballerini was named Argentina’s “Upcoming Opera Singer” by the Congress of Argentina and the Argentine Association of Critics and received scholarship to study with Sherrill Milnes. In January of 2016, Ballerini was awarded the Grand Prize at the Laguna Magica International Vocal Competition in Chile, receiving invitations to sing Cassio in Otello with the Teatro Argentino and to sing with the Tenerife Opera.

In the 2016/17 season, Ballerini sang Il Tenor Italiano in Der Rosenkavalier at the Teatro Colón in Buenos Aires, Don Ramiro in La Cenerentola at the Teatro Argentino, and Ernesto in Don Pasquale at the Atlanta Opera. He also covered the roles of Don Ottavio in Don Giovanni and Count Almaviva in Il Barbiere di Siviglia at the Metropolitan Opera in New York City. In July of 2017, Ballerini returned to the Caramoor Festival in New York to sing Gualtiero in Bellini’s Il pirata opposite Angela Meade. In the 2015/16 season, he made his acclaimed United States debut at the Caramoor Festival as Fernand in La Favorite and sang the role of Tybalt in The Atlanta Opera’s production of Romeo et Juliette. After singing the role of Conte di Libenskof in Il Viaggio a Reims at the Teatro Bellas Artes in Mexico City, the tenor returned to the Teatro Colon in Buenos Aires to sing Jünge Graf in Zimmerman’s Die Soldaten.

In the 2018/19 season, Ballerini made his debut at the Teatro Regio di Torino as Nemorino, a role which he later sang for his debut with Opéra de Toulon. Ballerini then returned to the United States for his debut with Opera Saratoga as Tonio in La fille du regiment and to sing concerts in New York, Savannah and Atlanta. He also appeared at the Teatro Colon, singing Mozart’s Requiem. In the 2017/18 season, Ballerini made his European debut as Gualtiero in Il pirata at the Opéra National de Bordeaux, after which he appeared for the first time in Bilbao as Ernesto in Don Pasquale and debuted as Tonio at the Atlanta Opera. He also returned to the Teatro Colon as Lindoro in L’italiana in Algeri, appeared at the Teatro Nuovo’s inaugural festival at SUNY Purchase’s Performing Arts Center as Argiro in Tancredi, and sang a concert of arias at the Dallas Opera.

Other highlights from previous seasons include Nemorino in L’elisir d’amore at the Teatro Solis in Montevideo alongside baritone Erwin Schrott, and performances at the Teatro Colon as the title role in Luigi Nono’s Prometeo and Arbace in Mozart’s Idomeneo. Ballerini also sang Lindoro in L’italiana in Algeri at the Teatro Argentino; Belmonte in Die entführung aus dem Serail, Lord Perci in Anna Bolena, Gennaro in Lucrezia Borgia, Ferrando in Così fan tutte, Ernesto in Don Pasquale, Alfred in Die Fledermaus and Tebaldo in I Capuleti e i Montecchi at the Teatro Avenida; Don Ottavio in Don Giovanni, Romeo and Tybalt in Romeo et Juliette and Jaquino in Fidelio at the Teatro Municipal in Rio de Janeiro, Brazil; Tamino in Die Zauberflöte at the Teatro Libertador in Cordoba; and Beethoven’s Symphony No. 9 at the Colsubsidio Theatre’s re-opening in Bogotá, Colombia.