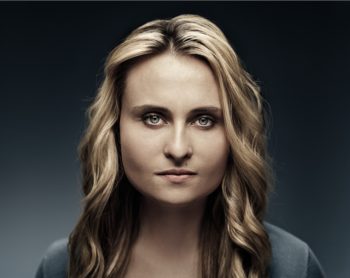 Since her acclaimed performance in the fall of 2006 of Rachel in the Royal Opera, Covent Garden’s concerts of Halevy’s La Juive, Russian born soprano Marina Poplavskaya has established herself internationally as one of the most impressive artists to be heard today. The British press and public hailed her as a major new singer, and as a result of this great success she received invitations from important theatres throughout the world such as the Metropolitan Opera, Wiener Staatsoper, Bayerische Staatsoper, Staatsoper Berlin, Dutch National Opera, Los Angeles Opera, Staatsoper Hamburg, and many others including the Salzburg Festival.

Marina Poplavskaya began the 2012/2013 season as Lucrezia in Verdi’s I Due Foscari at the Los Angeles Opera opposite Placido Domingo. She subsequently sang the Verdi Requiem with the Philadelphia Orchestra under Yannick Nezet Seguin and made her debut in concert in Mexico City under Jan Latham-Koenig. Poplavskaya then returned to the Royal Opera, Covent Garden as Alice in Robert le Diable. During the season she also added to her repertoire the roles of Gutrune in a new production of Goetterdaemmerung at the Staatsoper Berlin under Daniel Barenboim. Poplavskaya also returned to Dutch National Opera as Violetta in a repeat of the Willy Decker production of La Traviata in which she made her debut in the role in 2009. Engagements for the 2013/2014 season included a return to the Metropolitan Opera as Tatiana in Eugene Onegin.

Marina Poplavskaya began her 2011/2012 season as Violetta at Covent Garden and during the season also made her debut at the Bayerische Staatsoper in the same role.  At Covent Garden Royal Opera House, Marina also sang Act 4 of Otello opposite Placido Domingo in Gala performances. Poplavskaya returned to the Metropolitan Opera as Marguerite opposite Jonas Kaufmann in the new production of Faust. After a solo concert at the Tchaikovsky Hall in Moscow at the end of January, in March of 2012, she debuted at the Wiener Staatsoper  as Amelia in Simone Boccanegra, and then sang Leonora in the new production of Il Trovatore at the Théâtre Royale de la Monnaie in Brussels.

Marina Poplavskaya was born in Moscow and studied at the State M Ippolitov-Ivanov Music Institute with P. Tarassov and I. Shapur. After that she began winning numerous prizes in international competitions, which included the first prize in the Maria Callas Grand Prix in Athens. She began her professional career at the New Opera Theatre in Moscow making her operatic debut as Tatyana in Eugene Onegin. She was also a soloist at the Stanislavsky and Nemirovich-Dantchenko Moscow Academic Opera Theatre. She subsequently made her debut at the Bolshoi Theatre as Ann Truelove in The Rake’s Progress, followed by Maria in Mazeppa. In 2004, Ms. Poplavskaya joined the Jette Parker Young Artists Programme of the Royal Opera Covent Garden in September 2005 and made her company debut there as the Third Norn in Götterdammerung under Antonio Pappano.