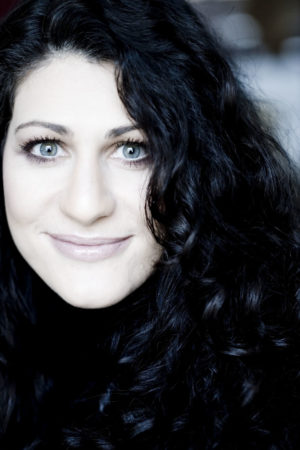 Anja Harteros is internationally acknowledged as one of the leading sopranos of our day and has been acclaimed in the world’s leading opera houses including the Metropolitan Opera, Teatro alla Scala, Milan, Deutsche Oper Berlin, Wiener Staatsoper, Semperoper Dresden, Opéra national de Paris, and many others, as well as at the Salzburg Festival where she made a sensational debut as Elettra in Idomeneo in 2006. In May of 2008 she made her long awaited debut at the Royal Opera House as Amelia in Simon Boccanegra.

Harteros’ 2011/12 season included her first performances in the role of Angelica in Suor Angelica at the Royal Opera House, a new production of Don Carlos at Deutsche Oper Berlin, and Don Carlos in Munich. She also returned to the Royal Opera House in La bohème and Otello and sang Der Rosenkavalier in Vienna. Highlights of Harteros’ 2010/11 season include Otello in Baden Baden and Paris under Daniel Harding, a new production of Alcina at Wiener Staatsoper and La bohème in Munich. She also sang her first Leonora in Il Trovatore in Cologne and her first Marschallin in Der Rosenkavalier in Munich.

Anja Harteros regularly collaborates with eminent conductors such as Antonio Pappano, Riccardo Muti, James Levine, Daniel Barenboim, Zubin Mehta, Christian Thielemann, Fabio Luisi, Ivor Bolton and many others. She commands a vast concert repertoire of works such as Beethoven’s Missa Solemnis, Verdi’s Requiem, and Strauss’s Four Last Songs. Harteros has recorded the Four Last Songs and a Solo Aria Album for BMG, as well as complete recordings of live performances of Alcina and La traviata in Munich. Her performance of Idomeneo from Salzburg is available on DVD.

Anja Harteros completed her musical studies at the Hochschule fuer Musik in Cologne where she was a pupil of Professor Liselotte Hammes. While still a student, she was invited for her first engagements at the opera houses of Gelsenkrichen and Wuppertal. She then joined the ensemble in Bonn for two seasons. In 1999 Harteros won the Cardiff Singer of the World Competition and her subsequent debut in Munich rapidly led to appearances all over the world. Born in Germany and of German and Greek heritage, Harteros is acclaimed in both the Italian and German repertoire.